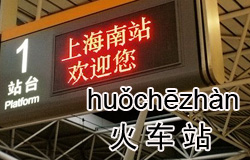 When catching a train in a Chinese city, you need to know which train station you're leaving from. Cities will often have several train stations, and they are often nowhere near each other. In this lesson, a traveler in Shanghai is surprised to find that his taxi driver asks him which train station he wants to go to.