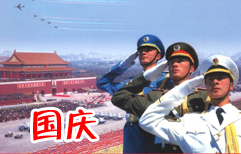 The five-star flag flutters in the breeze. An ancient and glorious civilization salutes its leaders. Troops march down the avenue in perfect lock-step. The whole world looks on in awe. Today's Mandarin podcast is about National Day, which celebrates the founding of the People's Republic of China. It's especially significant this year, as 2009 marks the sixtieth anniversary of the nation's founding. This lesson will also answer the eternal question: "Hu is the leader of China?"