How to say ‘YES’ in Chinese? 18 ways to express agreement in Mandarin

How do you say yes in Chinese? In this post, we will teach you 18 ways to express agreement in Mandarin that will make you sound more like a native speaker.

If you’ve just started learning a new language, you probably aren’t yet equipped with a lot of ways to express agreement — the simple “yes” is likely to be your only option. Luckily, there’s no direct equivalent to the English “yes” in Chinese. In this post, we’re going to teach you 18 ways to express agreement in Mandarin that will immediately boost your confidence and make you sound more like a native speaker.

Used to confirm something. Typically, 是 is used in answers to questions that contain 是.

Replying with 是 to the question that has a different verb is a much rarer case.

In some grammatical structures, 是 is used as an auxiliary verb, but it’ll still be used in an answer.

There’s also 是的 shì de, which is a very polite agreement that also expresses complaisance to the person you’re talking to. It’s more polite than 是, and more colloquial. The question will still contain 是.

Means “correct” in Chinese. It’s very similar to how “right” is used in English.

Similar to “good,” “fine,” and “OK.” This is the most common wayof saying “OK” or “good” as an agreement to a request. 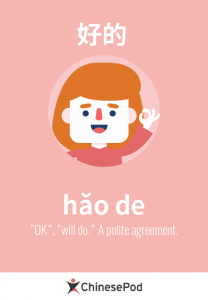 “OK”, “will do.” A polite agreement. You can hear 好的 from hotel staff or a server at a restaurant. It also means “I agree (with you).”

An equivalent of 够了gòu le, meaning “enough.” Can be used in less formal scenarios.

“Hell yeah!” This is how you show your friends you’re excited about the suggestion they’ve just made.

“That’s right.” It literally means “you’re not wrong”. 没错 could be translated into Chinese as: 你说对了nǐ shuō duì le (what you said is correct), 没有错误 méi yǒu cuò wù (there’s no mistake).

The kind of “correct” that means that the answer given is the only right answer possible. This expression is frequently used in exact sciences, or when the question asks for an exact number. 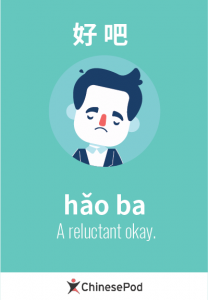 A reluctant OK. You’re agreeing to something but you’d rather not do it.

Bear in mind, that 好吧 isn’t the kind of thing you’d say to your boss. Better respond with 好的.

“Will do,” “OK.” This word originates from the verb “to go”. You may have seen this character painted on the green traffic light. It’s also used in the words “bicycle” 自行车 zì xíng chē (literally “self-moving cart”) and “to travel” 旅行 lǚ xíng .
A: 晚上吃火锅可以吗？wǎn shàng chī huǒ guō kě yǐ ma ? — Can we have hotpot tonight?
B: 行 xíng — OK.

There are also 行 variations that are used in Chinese speech: 还行 hái xíng, 行了xíng le.

“Allowed”, “possible.” Used to give someone permission to do something, often translated as “can” or “may.”

可以 and 行 are both words that mean “you can,” so in some cases 可以 and 行 can be used interchangeably. 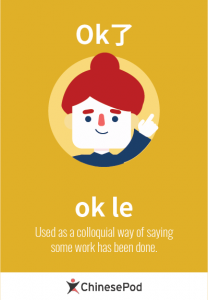 Used as a colloquial way of saying some work has been done, or simply to give a positive response.

The literal meaning is “have.” An affirmative response to a question that contains 有.

“No problem,” “sure.” The literal translation of this expression is “without question.” Avoid informal environments.

A: 我能用下你的手机吗？wǒ néng yòng xià nǐ de shǒu jī ma? — Can I use your cell phone?
B: 没问题 méi wèn tí — No problem.

“Um,” “yeah,” “right.” An affirmative interjection. Women tend to use it more often than men. The Chinese use 嗯 or 嗯嗯 ēn ēn especially often when talking to their relatives and friends on the phone.

To understand how to pronounce 嗯 and other exclamative particles in Chinese, check out this Chinesepod video: Native Noises.

“Of course,” “certainly.” Similar to this expression is 那当然 nà dāng rán, which is a more informal version of 当然 and means “obviously” or “duh.”

It’s similar to 当然 and means “of course”, “certainly.”

Want a bonus way of giving an affirmative response in Chinese? Just follow this simple rule: answer with a predicate used in the question.

Do you know any other ways of saying “yes” in Chinese that we missed? Or maybe you have a funny story about how you said the wrong kind of “yes”? We’re looking forward to reading your comments.

Elena is a digital marketing manager who has been learning Chinese since 2012. She believes her family tree has Chinese roots, and whether she has Asian descent is one of the most frequently asked questions she gets. The expression 辛苦你了 is something she had always lacked in her native language. Elena’s favourite lesson on ChinesePod is “Fighting over the Bill”.

‹ Where to start reading Chinese Science Fiction › How do you say “Road Rage” in Mandarin?