Before traveling to China last year, I thought Thanksgiving was only known in America. To my surprise, my Chinese friends were eager to know what my Thanksgiving plans were as the holiday approached. They were curious to know if I was planning on traveling, eating turkey, getting together with my American friends and watching football, or getting dinner with them or simply just going to a bar. Their eyes glistened with curiosity as I explained to them the customs and traditions that revolve around Thanksgiving dinner.

During this conversation, I emphasized the importance of gratuity, and how Thanksgiving was an opportunity to have precious moments away from all the fuzz and buzz of a busy life.  Americans use this holiday to reflect on how grateful we are and to take time to be with our families. Since my Chinese friends seemed so curious and eager to know more about Thanksgiving, I decided to have a Thanksgiving dinner with them. What I had in mind was, of course, something like this: 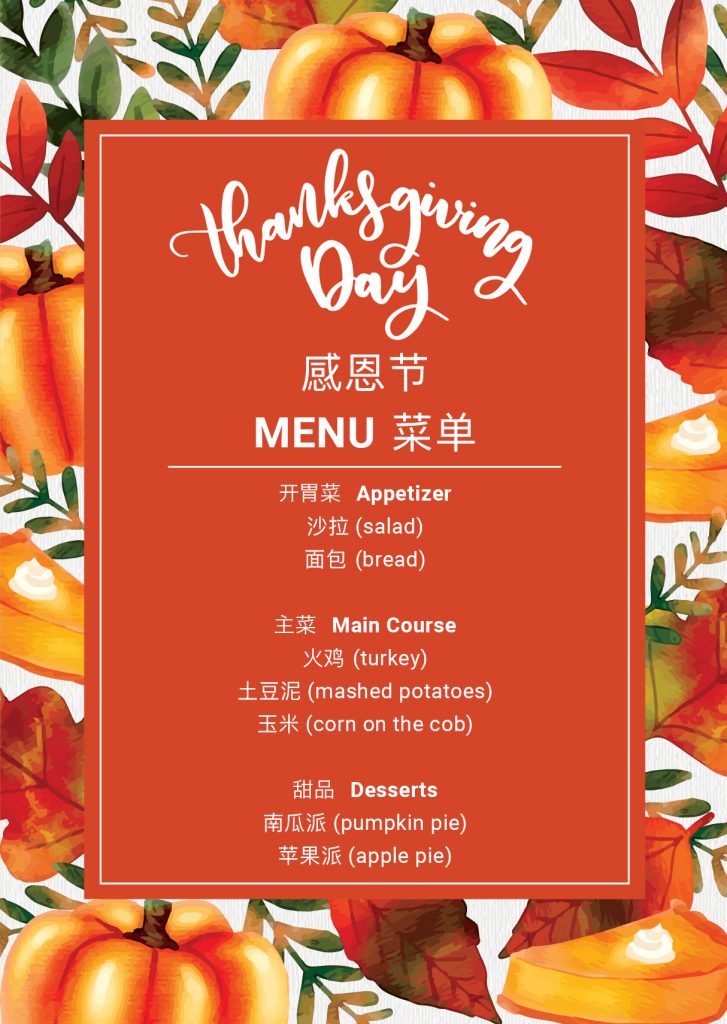 But in reality, we had this instead:

It was a pleasant and entertaining dinner.   All types of pizzas were being passed around the table, such as pineapple pizza (菠萝比萨 bōluó bǐsà), cheese pizza (芝士披萨 zhīshì pīsà), pepperoni pizza (意大利辣香肠比萨 yìdàlì là xiāngcháng bǐsà) et cetera.  My friends tried hard to cut the pizza with their chopsticks (yes chopsticks are at times provided in some western joints!), just for the sake of laughter. I asked my friends, “Why the Chinese don’t eat much turkey at all?”  No one seemed to have an answer to it, so we looked it up in Baidu (the Chinese version of Google) and that is when I realized that turkeys are native to North America. And since Americans don’t export their cuisine as the French and Spanish do, there has not been much exposure to turkey in Chinese cooking. Nevertheless, we laughed until our stomachs couldn’t take it anymore.  The best part of it all is that we only spoke in Mandarin! It was a truly unforgettable Thanksgiving and one that will forever be ingrained in my heart, or as the chengyu says (刻骨铭心 kègǔmíngxīn).

Spending an American holiday with someone from another culture is truly special. I encourage every American who finds themself in a foreign country to have some foreign friends over for Thanksgiving dinner. Not only does it enrich your holiday experience, but you will also be able to learn things outside of a language.

I want to wish everybody a Happy Thanksgiving (感恩节快乐 gǎnēnjiékuàilè)!