I always love festivals. A four-day vacation is coming because of the Dragon Boat Festival! Hooray!

Okay, let’s calm down a bit so that I can share some interesting information about this festival with you. The first thing I want to say is that the Chinese name for Dragon Boat Festival is not related to “dragons” or “boats” at all! So the Chinese name is 端午节 [duānwǔ jié]. 端 comes from 开端 [kāiduān] meaning “to start”. 午 is another name for 五月 [wǔyuè] “May”. And 节 is 节日 [jiérì] “festival”. Because this festival is on May 5th in the Lunar calendar, we call it 端午节 [duānwǔ jié]: “the festival of the start of May”. 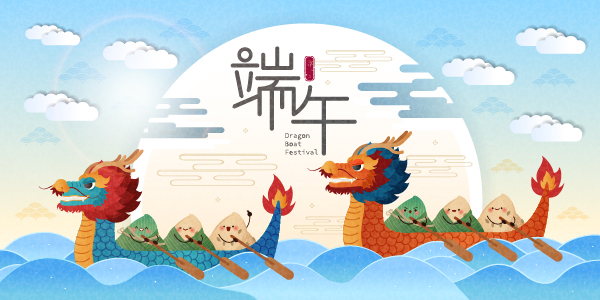 I know that some of you might have heard the story of this festival before, but there are still many new students who might be interested, so let me briefly introduce the origin of the Dragon Boat Festival.

In 278 BC, a famous poet, 屈原 [Qūyuán], threw himself into a river on May 5th and ended his life because he was extremely saddened by the government. People were so touched by his patriotism that they established a festival to commemorate him.

To celebrate the festival, people would engage in many traditions. The very obvious one is to 划龙舟 [huá lóngzhōu], to row dragon boats, or 看比赛 [kàn bǐsài], to watch the competitions. But why do people row boats on that day? In the beginning, people were afraid that the fish in that river would eat 屈原’s body so they rowed boats to scare the fish away. But nowadays, it’s more for entertainment.

In the past, while rowing boats, people also threw 粽子 [zòngzi], sticky rice dumplings, into the river so that the fish would eat the dumplings instead of 屈原’s body. In the beginning, people stuffed the sticky rice in bamboos but now they wrapped the rice in leaves. Why did they change? Because someone said that 屈原 went into his dream and told him “The water dragon in the river steals all the sticky rice dumplings. Pack them with specific leaves and strings to scare it away.”

Having sticky rice dumplings is the most common activity now, so it gradually became commercialized. Nowadays, many food companies start to sell 礼盒 [lǐhé], gift box, which contains the most proper gift for certain festivals. So, during Dragon Boat Festival, you might often hear 粽子礼盒 [zòngzi lǐhé] or 端午礼盒 [duānwǔ lǐhé]. Can you believe it? Even Starbucks started to sell its own sticky rice dumplings!?

By the way, don’t think that traditional food tastes bad. Rice dumplings are really delicious. And because of the fashion trend, there are more and more flavors that are getting fancier! They could be salty, sweet, hot, or iced. They might be brown, pink, green, or any other color!

Okay, too much food. Let’s see what else do we do or what other gifts can we buy on this festival.

For children, definitely 做香包 [zuò xiāng bāo] make a fragrant sachet and 挂香包 [guà xiāng bāo] bring it. During May, there are many mosquitoes, bugs, or snakes. To avoid them, people packed herbs into sachets. These herbs not only scare the bugs away but also smells good. So many elementary teachers would teach kids how to make one. It’s a common memory for many Chinese people.

For adults, alcohol is always a good choice for a gift. During Dragon Boat Festival, there’s a tradition: 喝雄黄酒 [hē xiónghuángjiǔ] to drink Xionghuang. But…don’t rush to buy it and drink it. Scientific research says that this kind of alcohol is poisonous. So we only use it to smear a bit on our face or to put it on the ground to scare mosquitoes, bugs, or snakes away. Although we can’t drink it, we can drink other alcoholic beverages; thus, people buy alcohol as a gift during this festival. Well, alcohol is kind of a great choice no matter which festival it is, isn’t it.

I only mentioned some common activities that people would do during the Dragon Boat Festival. Have you heard or seen other activities? Or how would you like to celebrate this festival? Feel free to share it with everybody. 端午节快乐！[Duānwǔ jié kuàilè!] See you in the next post!