Jobs Requiring Chinese: So You Want To Work In Chinese?

This is a guest Blog post written by Frances Chan, a language-learning consultant: she helps people learn languages. Her pieces on learning languages have helped thousands of people. She most enjoys teaching language-learners how to sound more like native speakers. If you are interested in more pieces that she has written, check out her blog.

Are you keen to work in Chinese but you’re unsure of where to start looking or which jobs to research that require Chinese?

You’ve been studying Mandarin for a few years, and you want to take your China-savvy to the next level: your career. But what do you do with it? There are few straightforward applications of this language—or any human language for that matter. Learn programming, and you can become a software engineer. Learn languages, and you… ?

What’s more, hundreds of thousands of Chinese students study in Anglophone countries each year, gaining professional fluency in English in addition to their already native grasp on Chinese. Based on language abilities alone, they have an absolute advantage over you. What do you do?

As an avid language-learner keen on applying my hard-earned skills, I was curious myself. So this past month, I interviewed ten early-career professionals who’ve begun building a career out of their Chinese skills.

In order of seniority, of course.

WHAT KIND OF WORK DO THEY DO?

A number work in jobs that are reserved for Americans but require proficiency in Chinese. About a third of our interviewees, for instance, currently work for or have worked for the U.S. government. Such positions often involve doing research on Greater China for the State Department or Congressional committees. Smaller companies and organizations in the U.S. may also not have the means to go through the procedure of hiring a foreign worker. Ethan, for instance, worked at a non-profit where he did legal intake for low-income immigrants, 95% of whom were Chinese. Work that involves intellectual property similarly prefers U.S. citizens. Kyle worked alongside ex-CIA officers developing a tool that scans employee’s English and Chinese emails for possible leakage of trade secrets. He therefore had to research standard practices in the information security industry in Chinese. This would seem to be a job better suited for a Chinese native, but he believes that the American company he worked for placed greater trust in someone from their own country.

There are also many industries that need Americans and Chinese working in tandem. Most familiar to readers would be that of education consulting, in which American college grads helping Chinese students get into U.S. colleges. A third of our interviewees either currently work or have worked in this industry before. As a recent college grad, the college prep business is a nearly surefire way to procure a Chinese work visa, which usually calls for two years of work experience. Once there, it is possible to pursue other projects as well. Nicholas, who works at such a firm, concurrently helps run a company that connects entrepreneurs to mentors around the world.

In addition to helping Chinese students study in the U.S., U.S. college graduates can also help fellow Americans travel to or study in the Chinese-speaking world. Both Logan and John have coordinated study-abroad programs for Americans studying Chinese. Azuraye plans and accompanies US business school visits to mainland China, Hong Kong, and Taiwan at a Colorado-based educational travel company. Knowledge of both cultures allows them to liaison the two sets of people they work with.

Analyst and researcher positions, which call for a wide range of perspectives, also benefit from a combination of talent from the U.S. and China. Both Kelsey, who has worked as an analyst at two consulting firms, and Patrick, who researched the Chinese economy for a foreign policy think tank, noted that they were never in competition with their Chinese colleagues.

This relationship mirrors Alec’s experience at JP Morgan in Hong Kong. “I could correct Chinese analysts’ English and they could correct my Chinese,” he said. Further, while he interfaced with clients in Chinese on a daily basis, he found that native proficiency in English often proved to be his greatest asset, enabling him to take the lead in projects involving South East Asia or Asian clients looking to buy U.S. assets.

Other than that, finding a job in Chinese boils down to finding your niche. John noted, “An American will never understand the Chinese world as well as a Chinese person, and they’ll probably want more money. If they want to be successful in the Chinese job market, they’ll need a skill so unique it can’t be replicated.” He cited the example of a bilingual American sports agent he knows who gets American players to play in the Chinese Basketball Association (CBA). And the example of Jimmy, an American who runs a local Tennessee-themed bar and greets his customers as they enter. “You’ve gotta have Jimmy,” John observes.

Kyle, who recently transitioned out of his intellectual property job, agrees. Combining his background in Chinese and environmental studies, he is working on a piece on environmental issues in his home state of Texas for China National Astronomy. He is also transitioning into full-time photography and has made use of his talents at a marketing position before and is now in touch with China National Geography. Though Kyle’s combination of environmental studies and adventure photography with Chinese may seem unique, he’s confident that anyone could take fuse their unique talents with Chinese to find a fulfilling career.

HOW DID THEY GO FROM LEARNING CHINESE TO USING IT?

In addition to university career center emails, many of our interviewees found their jobs through Chinese study abroad programs and other China-related communities. Kyle and Azuraye found opportunities through the Project Pengyou network, while Kelsey landed a teaching job through the Yale-China job board (now defunct). John joined a study-abroad organization after having spent his senior year in China with them.

Washington, D.C. stood out as a hub for jobs. Kelsey and Logan found opportunities there during their master’s programs in the city. Kelsey recalls that she heard of jobs “just by being in D.C.” Eliot, when enrolled in an international relations program at Johns Hopkin’s center in China, also found an internship with Congress.

A few of our interviewees believe that opportunities opened up for them specifically because of their knowledge of Chinese language and culture. “In the states,” John posited, “I would need a master’s degree to do what I’m doing now in China.” Kyle, who is transitioning into full-time photography, said, “This would not be a reality in the U.S. The competition is too great.” Back in the U.S., Ethan mentioned that he found his job by including “Chinese” as a keyword in his job search. Eliot noted that even within the same company, certain opportunities would open up to him as opposed to other American colleagues, because of his ability to understand Chinese.

Chinese may still not be as universally applicable as programming skills. But as we’ve seen, knowledge of this language and culture is versatile enough to adapt to a variety of careers—from travel and sports to business and law—in a variety of locations—Boulder and Beijing to Shenzhen and D.C. Those with a special skill set should be able to, given the right network, blend it with their knowledge of Chinese language and culture, while those less-specialized should look more broadly at positions that need Americans proficient in Chinese.

Want to speak Mandarin Chinese the right way? Why not try our “Say it Right” course!

Say it Right is a ChinesePod original video course with game-changing instruction on how to master Chinese pronunciation. Gain the confidence and skill to speak like a native. 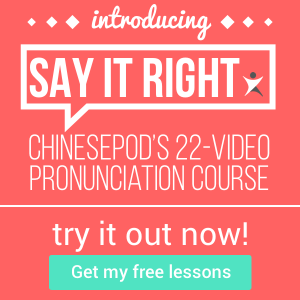