We all know odd things happen around the world on a regular basis and China is the frontrunner for strange happenings. From aliens to bean sprouts growing out of people’s heads, China never fails to have a newsworthy item that makes us say “WTF, China?!” Read more for our roundup of five unique stories hailing from China and the language behind them.

What if I told you to get up and move because I decided I wanted to build a telescope? You’d probably be say, “F**k off!”

Welp, this is actually happening to over NINE THOUSAND villagers living in the Guizhou Province, Pingtang County | 贵州省，平塘县 | Guìzhōu Shěng, Píngtáng Xiàn located in Southern China. This is exactly what China does when they decide they want to build the world’s largest radio telescope. Measuring at 500 meters (1,640 feet) in diameter, it is appropriately named the 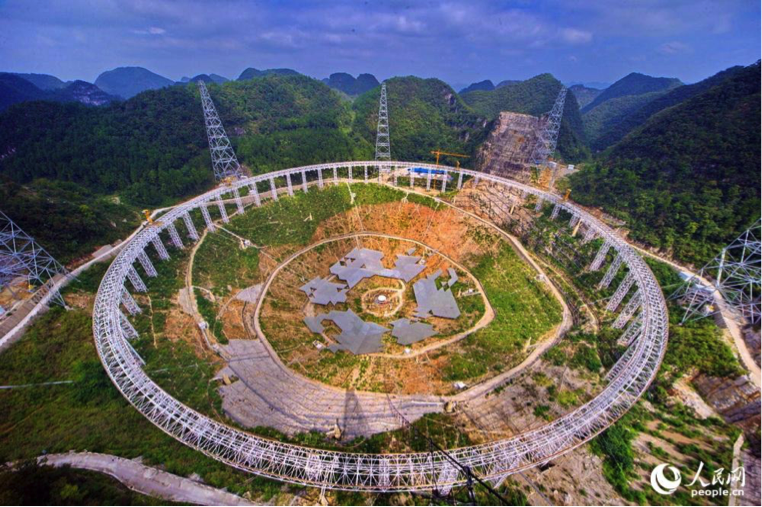 500 Meter Aperture Spherical Telescope | 五百米口径球面射电望远镜 | Wǔbǎimǐ kǒujìng qiúmiàn shèdiàn wàngyuǎnjìng… calle FAST for short. Everyone living within 4.8 kilometers (3 miles) of FAST must be relocated so the telescope will not pick up erroneous electromagnetic waves. And I know what you’re thinking, “that’s pretty shitty!” But alas! The government does have a soul:  it is giving out compensation for housing to each person inconvenienced by the project.

So what exactly is it that they’re looking for… Aliens!? Yes, actually! The plan is to search for alien | 外星人 | wài xīng rén life, and learn more about black holes | 黑洞 | hēidòng, galaxies | 星系 | xīngxì…etc. Thanks to the sheer size of the telescope it will be able to scan further, faster, and clearer than any telescope in existence. I, for one, can’t wait to see what they find… and give a warm welcome our new overlords.

Relocations like this happen every now and again in China when there are large projects. You can find a ChinesePod lesson related to this topic here: Resisting Relocation (Upper Intermediate)

For a select few cities in China, Uber | 优步 | Yōubù is perfect for those who desire traveling efficiently and in style. That being said not all of the drivers work because of the popularity of the service. Some have an ulterior motive: they just want someone to chat too.

Apparently, there are a handful of Uber drivers in China who work only to chat with the people they pick up. Since life is becoming more and more tech based, it has apparently become more difficult to meet people face-to-face (haven’t they heard of Tinder?!)

These chatty drivers decided to find a way to balance tech and real-life. This is a convenient way for them to chat with others without the need for awkward ice-breakers and goodbyes–and make money while doing so. But it doesn’t stop there: quite a few of the drivers have decided to become friends and regularly meet up with each other in their free time. They share updates on the local traffic situation and tips on how to get driving bonuses. Using China’s ever popular WeChat | 微信 | Wēixìn, they contact one another to chat it up, have a bite to eat, or even go on trips together. Seems like these drivers have actually found a great way to make new and potentially lifelong friends. 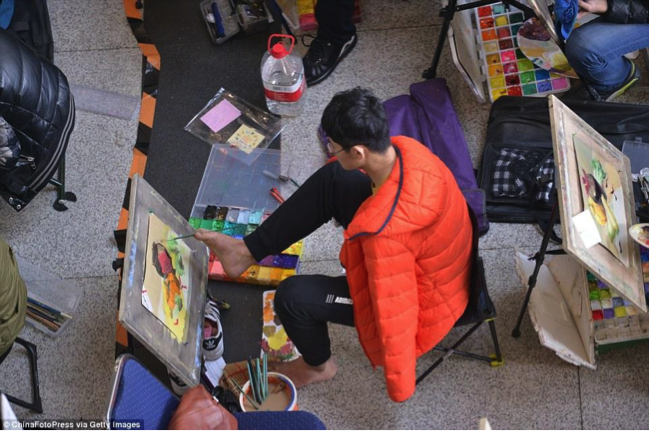 Every year the Shandong University of Arts and Design (山东工艺美术学院 | Shāndōng Gōngyì Měishù Xuéyuàn), located in east China, has a massive entrance exam (入学考试 | rùxué kǎoshì). Seven thousand hopefuls compete entry into this university and here’s what makes that number amazing: there are only 30 available openings. Housing that many students is obviously not an easy feat, so they hold the examination at a nearby convention center. The hall becomes a sea of painting easels and students hoping their artistic talent will grant them a spot. All of the students at the exam are given the same subjects to paint, sketch and draw. Do you think you would be up for a challenge like this? One of the applicants, a student with no arms (seen in the picture below), also entered to showcase his talents. Because impossible is nothing.

If you fancy art and want to learn Chinese technique, learn how to sign up for a class: Signing Up For Art Class

#4: They Said I Could Become Anything… So I Became a Plant 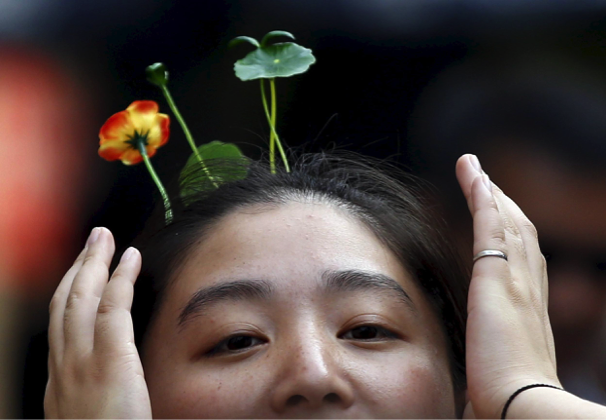 Have you ever just wanted to be more in touch with nature? Like a symbiotic relationship with Mother Earth? Maybe you’ve considered growing a plant out of your head? Well who is stopping you? Certainly not China: in Beijing, this is actually a huge phenomenon. When I first read about this, I thought someone must have been making a total joke. But then, I saw it up close and in person…a man with a bean sprout | 豆芽 | dòuyá seemingly growing from the middle of his head. In actuality, it’s a very realistic plastic sprout. But it isn’t confined to bean sprouts: some people wear vegetables, fruit, or flowers connected to a clip or headband. No one really seems to have a clear explanation as to why or how this trend originated. Some believe a famous singer wore it once, making it popular or it was just a way to make life more interesting and vibrant in contrast to…well you’ve heard about the weather in Beijing. I personally saw the trend recently in Taipei, Taiwan. So not only is the trend sprouting, but it’s also branching out (excuse the puns!). You still have time to get in on this trend, and I have to say they’re cute…maybe I’ll wear one too.

In China’s Guangdong Province | 广东省 | Guǎngdōng Shěng) there’s a man who can actually claim the title of Claw God. Chen Zhitong has three, count them, three rooms of toys | 玩具 wánjù from claw machines. These rooms hold a whopping three 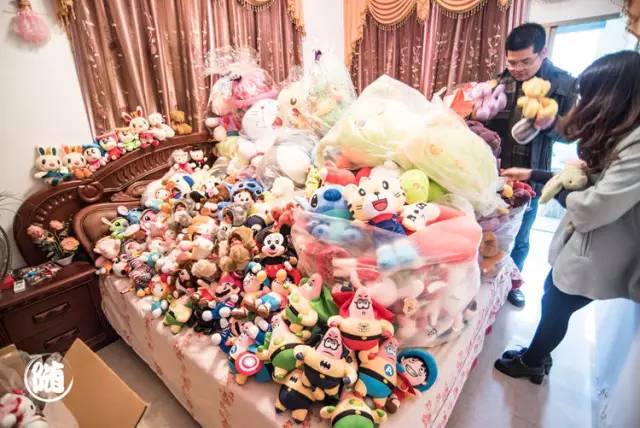 thousand toys and he says he has no plans on stopping: he wants to keep trying for more. In one go, he has been able to pretty much empty an entire machine, winning over 100 toys. Why does he do it? He says it’s just a way to kill time, he enjoys the process involved in getting each one, and also the excitement of people gathering around him to watch. He’s not that interested in the actual toy, but he does decide if it is worth the challenge based on how much it might have cost to make the toy versus how much it costs to pluck it from the machine. He also checks the sturdiness of the claw to estimate how easy or difficult it will be to grab the toy. That’s true patience and determination! Chen is so well known in his town that machine owners invite him over to their house for dinner and persuade him to stop using their machines. I think that’s odd considering they are still getting his money!

Chen showing off a fraction of his spoils.

So, what do you think? Luckily the treasure trove of interesting news from China is ever-growing. But it would be interesting to have an update on the findings from the mega telescope, or if claw god ends up buying another apartment to house his growing collection of toys. What is the most interesting thing you have heard about China recently? Share your story in the comments, I would love to hear! Until next time! 再见 | Zàijiàn!

If you found these stories interesting, you will love ChinesePod’s eclectic lesson selection. With over 3,500+ audio and video lessons in six different skill levels, you’ll find lessons on topics ranging everything from Alien Invasions to Sexual Health Check-ups. Sign up today and receive this blog-exclusive offer:

‹ 3 Goals to Set for Mastering Mandarin › China in the Spring: 15 Must-See Destinations